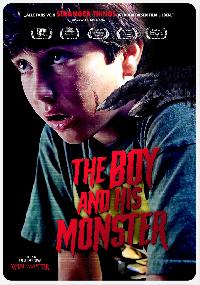 Movie description:
Eli believes that there’s a monster living in his basement, and it’s trying to steal his soul.

Like many 9-year-old boys, Eli Braverman believes something menacing lives in his basement. When his older sister leaves him home alone one night, Eli discovers if this evil is real or all in his head. What Eli confronts may end up being far more terrifying than even his worst nightmare.

The nine year-old boy Eli is lured by his teenager sister Emily and discloses to his school class that there is a Broughlin Monster in his basement that is afraid of the light. His parents Liz and Richard Braverman are summoned by the teacher that believes Eli has a psychological problem. Meanwhile Eli convinces his best friend Sam and his school mate Hillary that the monster does exist. When his parents leave Eli with Emily babysitting him to go to a restaurant, she leaves her brother alone in the house and goes to a bar with her boyfriend Dominic. Soon Eli finds whether the monster is real or fruit of his imagination.