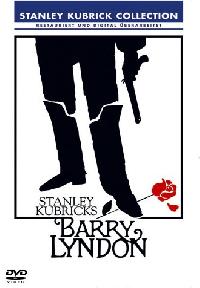 Υπόθεση:
Redmond Barry is a young, roguish Irishman who’s determined, in any way, to make a life for himself as a wealthy nobleman. Enlisting in the British Army, fighting in the Seven Years War in Europe, Barry deserts from the British army, joins the Prussian army, gets promoted to the rank of a spy, then becomes pupil to a Chevalier and con artist/gambler. Barry then lies, dupes, duels and seduces his way up the social ladder and enters into a lustful but loveless marriage to a wealthy countess named Lady Lyndon, takes the name of Barry Lyndon, settles in England with wealth and power beyond his wildest dreams, then slowly falls dramatically into ruin.

In fact it’s one of Kubrick’s most gripping pictures, with a narrative drive second only to that of »Dr. Strangelove« (and it’s unquestionably a more glorious creation than, say, anything he made in the 1950s). English director Michael Powell (while attributing a similar failing to one of his own works) says that Kubrick fell into »the trap of the picturesque«, but while I admire Powell as a creator, the judgment is absurd: at the VERY least, each lush image shows us people not just occupying a part of the screen but inhabiting a world, and tells us much about their relation to that world. Many shots are indeed amazing and beguile the eye, but they don’t have the effect they do simply because they would make nice postcards.
THIS, I feel sure (without having read Thackeray), is the proper way to adapt a long story from novel to screen. Each scene is either allowed as much time as it needs to make its point and its impact, or it’s cut altogether – you won’t catch Kubrick skating too quickly over his material for no better reason than to fit it all in. The third-person narration (consisting of witty, beautifully crafted sentences – it’s about time I did read Thackeray) almost performs a kind of dance with the images, gliding in just when we need it, taking a step back when we don’t. (So rarely is even third-person narration used so well.) And as always, Kubrick’s musical sense is unerring. My impression at the time was that I was listening to mid-eighteenth century music that gave way to pieces from the classical era as the hero started to move in higher and higher circles. I was more or less right. But then I noticed Schubert’s name in the credits – and I realised with a start that I’d been listening to, had even started tapping my feet to, a Schubert piece I was familiar with, without the anachronism registering.
It’s a pity Kubrick stopped making epics after this. Look at the ones he’s responsible for: »Spartacus« (not a project Kubrick was fond of, admittedly, but still the most magnificent of all Roman epics) »2001« (the most magnificent of ALL epics), and »Barry Lyndon«. The last of the three is by no means a poor cousin.