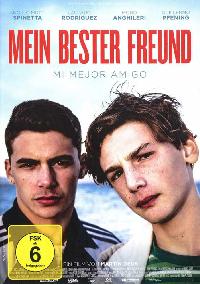 Υπόθεση:
Lorenzo is a quiet teenager who lives with his parents and his younger brother Luky in a small city in the Argentinean Patagonia. One day, a family friend’s son named Caíto moves south and settles in at Lorenzo’s home. His family is going through difficult times and can’t give much care to him. Caíto is very shy and hardly speaks. Lorenzo is supposed to help him feel at home. They become friends. They spend great amounts of time together. Although Lorenzo doesn’t like sports, he puts up with Caíto’s fascination for mountain biking. They share deep conversations too. They can be very different but they come to understand each other. It won’t be long until everybody at home realizes Caíto is a difficult case. After a couple of days, Lorenzo’s parents feel they’ve had enough. But then, Caíto makes a big confession to Lorenzo. He tells him the true reason why he was forced to leave his house. After that, Lorenzo takes charge of him so that his parents let him stay. He now has a secret to hold, a responsibility to take and a troublesome partner that will take him through new life experiences.

Lorenzo, a teenager who lives in Patagonia, receives Caíto, the son of some friends of the family who are going through a serious situation and cannot take care of him. Caíto is a troubled young man who has difficulty adapting. In spite of the differences they have a peculiar friendship, where each one learns a lot from the other. One day Caíto tells Lorenzo the real reason why he had to leave his house. From then on, Lorenzo will have to take charge of a secret too heavy to carry.

Coming from Argentina, »My Best Friend« (»Mi Mejor Amigo«) is a remarkably sensitive coming-of-age drama that keeps its LGBTQ themes gurgling in the background, never sensationalizing them to make a big plot point. This may make it feel somewhat elusive, but there’s a remarkable lack of sentimentality that helps the film resonate very strongly. As it digs deeper and deeper into the thoughts and feelings of a teen boy, it becomes very moving indeed.
This central character is 16-year-old Lorenzo who lives in remote Patagonia with his educated, switched-on parents. Lorenzo is skinny, more interested in books or music than in playing sport. No wonder he’s always the last one chosen for the team. Then one day his parents take in the son of a family friend who needs a place to live. Caito is just a year older than Lorenzo, but he’s beefy, confident and very cool. At least on the surface...