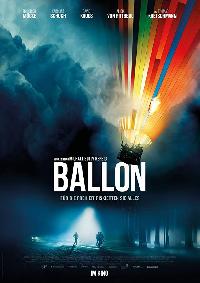 Movie description:
»Balloon« is a German thriller that deals with the crossing of the inner German border of the families Strelzyk and Wetzel from the GDR to West Germany with a homemade hot-air balloon.

In the summer of 1979, in Thüringen, in East Germany, two families put together a crazy plan. They are desperate to leave the DDR for the ’West’ and plan to flee in a homemade hot air balloon. After sewing and tinkering for weeks, the amateurs make their first attempt. Meters from the West German border, their balloon suffers from the rain and crash lands. Luckily, they manage to avoid being caught by the police. However, the wreckage from their escape attempt is found and that triggers a desperate manhunt. The tension rises as the families determine to try again, and a race against time ensues. On the one hand, the authorities, desperate to track down the traitors, become aware that a second attempt is being planned. On the other, the would-be escapees, conscious of the search drawing ever nearer, need to build a more robust, weatherproof balloon – and avoid leaving too many clues.